Maciej Puto received the degree of Master of Arts at the Faculty of Vocal Music and Drama of the Academy of Music in Bydgoszcz in 1995. He also completed Administration and Management Postgraduate Studies at Kazimierz Wielki University in Bydgoszcz and Culture Management Studies at the Warsaw School of Economics. Between 1996 and 2007 he was a press spokesman for the Pomeranian Philharmonic in Bydgoszcz. He managed the department of promotion in the Marshall’s Office in Toruń and Information Department in the Kujawsko-Pomorskie Province Office. Since 2011 he has been a director of the Kujawsko-Pomorskie Centre of Culture in Bydgoszcz. He has been successively modernising the objectives of this institution, taking care of the development of the main cultural movement and the promotion of high culture. His efforts resulted in the complete renovation and extension of the house of the Kujawsko-Pomorskie Centre of Culture. Since 1989 he has been working as a master of ceremonies, scriptwriter and concert producer. When he was still studying, Maciej Puto was employed by his alma mater, where he was responsible for organising concerts. In 1997, he started collaboration with the Bydgoszcz branch of TVP S.A. (Polish Television — the only public broadcaster in Poland), hosting his authorial musical show “Koncerty pod batutą”. Maciej Puto has also cooperated with the local radio of Kujawsko-Pomorskie Province (Radio PiK). Between 1996 and 2001 he was a member of the board of the J. Paderewski Music Society in Bydgoszcz. He prepared and organised the 5th edition of the Paderewski International Piano Competition in Bydgoszcz in 2001. He was appointed as a member of the organising committee of the Paderewski Year celebrations and he earned an Award of the President of Bydgoszcz for this work. Between 2004 and 2008 he was a member of the Programme Council of the Bydgoszcz Branch of TVP S.A. Until 2011, he had run a business, providing such services as concert and artistic event production. Since 2006, he has been teaching students of the Academy of Music in Bydgoszcz in the field of cultural marketing, public communication, and concert hosting . The most important ceremonies that Maciej Puto has hosted in the recent years include: Rafał Blechacz’s recital (2005, broadcast on the TVP Polonia channel), the concerts of the laureates of the Paderewski International Piano Competition (2010, 2013, Warsaw Philharmonic), Doctor Honoris Causa Awarding Ceremony in the Academy of Music in Bydgoszcz (2007, 2010). He has been the producer of many chamber and symphonic concerts, such as Rafał Blechacz’s recital in the town of Nakło nad Notecią and in Bydgoszcz, as well as the co-producer of the concert entitled  “Światło prawdy” (The Light of Truth) with the music of Michał Lorenc and the concert of the oratorio “Sanctus” composed by Włodzimierz Korcz. In May 2015 Maciej Puto won a competition for the post of Pomeranian Philharmonic director. He has been working as a director of the Pomeranian Philharmonic since 1 September 2015. 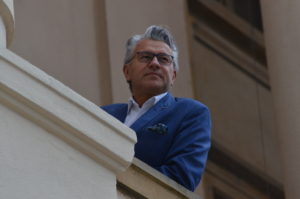