The Bydgoszcz Philharmonic ranks among the leading musical institutions in the country. It has two permanent artistic groups. One is established in 1946. Its traditions date back even further, to the interwar period, to City Symphonic Orchestra which exist at that time. The other group is Capella Bydgostiensis established in 1962, one of the first groups in Poland to present ancient music using instruments of the period and their replicas. The output of both musical groups in the Pomeranian Philharmonic includes numerous album recordings and foreign tours. Moreover, composers write music especially for them, since both Ignacy Jan Paderewski State Philharmonic Orchestra and Capella Bydgostiensis take part in world premieres of the works of such eminent musicians as Górecki, Kilar, Schaeffer, Twardowski or Penherski. Nobember 16th 1958 is an extremely important date in the more than 50-year-long history of the Pomeranian Philharmonic – when the first concert took place in its newly erected, exceptionally stately edifice. The building, raised through admirable efforts of the Philharmonic’s late long-standing director Andrzej Szwalbe, has an 880-seat concert hall with superb, world-famous acoustics, a 150-seat chamber music hall, and 170-seat concert foyer. It’s 47-pipe mechanical organ, built by the Rieger-Kloss company from Krnov (Czech Republic) is installed in the back of the concert hall stage, spacious enough to hold a grand orchestra and a choir. In the main foyer and side halls one can admire a rich collection of busts of famous composers and unique tapestries custom-woven at  the order of the Philharmonic. The series of tapestries by one of the most outstanding Polish colourists Tadeusz Brzozowski, titled Kwartet zapustny, holds a special place in the collection, as do the paintings, which include works of such famous artists as Zdzisław Beksiński, Jerzy Nowosielski and Jan Tarasin.

The artistic activities of the Pomeranian Philharmonic include symphonic and chamber concerts as well as recitals of greatest virtuosos from all over the world. Since 1958 the Philharmonic has also been engaged in extensive educational projects involving children and youth. Around 1000 programs and concerts aimed at developing the love of music are organized each year for 300 thousand young listeners. Two festivals, organized since 1963 Bydgoszcz Music Festivals and Internationals Festivals Musica Antiqua Europae Orientalis (organized since 1966 on a tri-annual basis), together with musicological and Slavonic congresses are especially prominent among the artistic activities of the Pomeranian Philharmonic. The MAEO festival plays an important cultural role; it provides an exceptionally valuable platform for  exchanging  ideas for scholars and artists of East and West. The musicological and Slavonic congresses gather representatives of more than 50 thriving world university centres spread between Washington and Moscow. The aim of both the Congress and Festival is to find the common cultural roots of the Old Continent. The MAEO Festival of Ancient Music of the East is a truly unique phenomenon in the world in terms of the wide scope of works in presents: the compositions originate from countries of Central and Eastern Europe and Byzantium. Many large-scale artistic events, featuring both the permanent groups and visiting artists, took place in the more than 50-year-long history of the Pomeranian Philharmonic. The Bydgoszcz stage has hosted such world celebrities as Gwendolyn Bradley, Benjamin Britten, Sarah Chang, Nelson Goerner, Leila Josefowicz, Ryszard Karczykowski, Cyprien Katsaris, Nigel Kennedy, Kevin Kenner, Kazimierz Kord, Mischa Maisky, Jerzy Maksymiuk, Witold Małcużyński, Kurt Masur, Shlomo Mintz, Garrick Ohlsson, Luciano Pavarotti, Peter Pears, Ilan Rogoff, Artur Rubinstein, Dang Thai Son, Aleksiej Sułtanov, Jeffrey Swann, Tatiana Szebanowa, Antoni Wit, Krystian Zimerman and numerous others, whose names cannot all be mentioned here. Furthermore, a number of outstanding artistic groups deserve a mention: BBC Radio Symphony Orchestra, National Symphony Orchestra of Polish Radio in Katowice, The King’s Singers, The Tallis Scholars, Westminister Abbey Choir and Academy of St. Martin in the Fields. Thanks to modern technology, music lovers from remote parts of Poland, using email, have been able to book tickets for these concerts remotely.

The performances of such celebrities can take place thanks to the generosity of the sponsors.The Pomeranian Philharmonic, due to its reputation and achievements, is invited to co-organize world famous artistic events. At a meeting in Warsaw on January 6th 2006 Eleonora Harendarska, the director of the Philharmonic and Elżbieta Penderecka the general director of Ludvig van Beethoven Easter Festival and Piano Festival, agreed on the form of future mutual cooperation. As a result of this cooperation world famous artistic groups, among others: Korean Chamber Ensemble, Shanghai Quartet, Massimo Mercelli Trio performed in the concert hall in Bydgoszcz. Common ventures are planned for consecutive seasons. The outstanding acoustic properties of the concert hall are used to make numerous recordings produced by professional publishers. A number of CDs recorded here were awarded the prestigious Fryderyk awards by the Polish record industry. The first Polish audiophile record, converted with 24-carat gold, was also recorded here. The building of the Pomeranian Philharmonic is also used to hold numerous congresses and conferences, organized by universities, banks, companies and big corporations. Artists, politicians, business executives and intellectual elite gather in the magnificent interior. The institution and both its musical groups separately are involved in many events of historic importance for the city, the region and the country. In 1999 the Pomeranian Philharmonic organized a series of concerts to commemorate the 150th anniversary of Fryderyk Chopin’s death, which took place with participation of the world’s most outstanding pianists. The Philharmonic initiated the legislative process behind the Act of the Polish Parliament, based on which 2001, Paderewski’s 140th birthday and 60th death anniversary, was declared the year of Ignacy Paderewski. This year alone will no doubt remain one of the most important years in terms of its abundance in significant artistic events in the entire history of the Philharmonic. Several other events included in various nationwide celebrations, took place here. Perhaps the most important ones included the inaugural concert on February 16th 2000 and the 39th editions of Bydgoszcz Music Festival dedicated to the master’s work in September. Yet another important element of the Festival was the symposium “The work and pianism of Paderewski in the context of the epoch” prepared by the Institute of Musicology of Warsaw University. In 2006 the Philharmonic hosted a number of presentations of Mozart’s works as part of the Mozart Year, with the participation of both orchestras of the Pomeranian Philharmonic and famous artists (e.g. Ewa Pobłocka, Jadwiga Kotnowska, Urszula Kryger and Takashi Yamamoto). Similarly, 2007, the year of the 125th birthday and 70th death anniversary of Karol Szymanowski, was declared the year of famous composer. The 45th Bydgoszcz Music Festival is a tribute to his outstanding artistic output and this year it title will be “Karol Szymanowski and 20th-century Music Masters”.  Due to good cooperation with the media, both public and commercial, our offer of fine music may extend even to remote reaches of Northern Poland. Mostly, however, our marketing activities focus on the region of Pomorze and Kujawy. All viewers of Polish Television Channel 2 and Internet users worldwide may learn about our activities via TV-text services or the Internet. Eleonora Harendarska has been general and artistic manager of the Ignacy Jan Paderewski State Philharmonic since 1991. From 20 April 2016 the director of the Philharmonic is Maciej Puto. The Philharmonic is managed jointly by the Kujawsko-Pomorskie Voivodeship and the Minister of Culture and National Heritage. 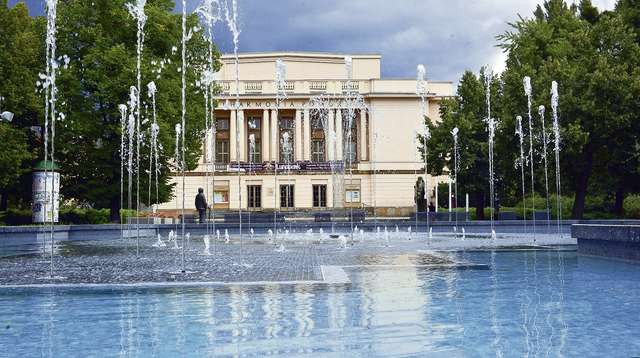 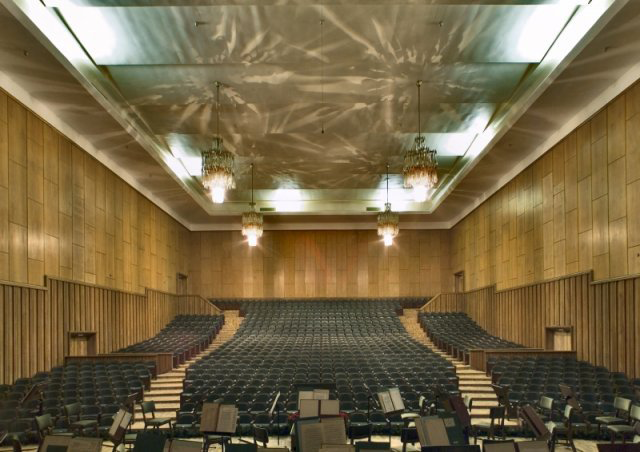 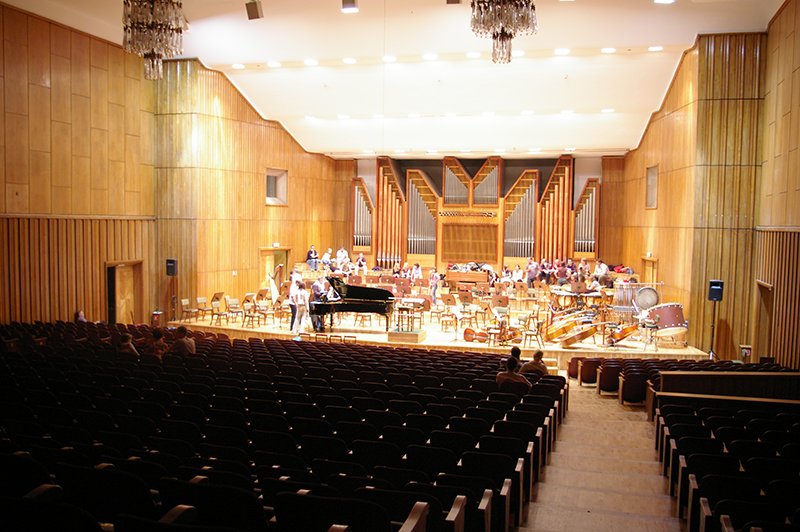 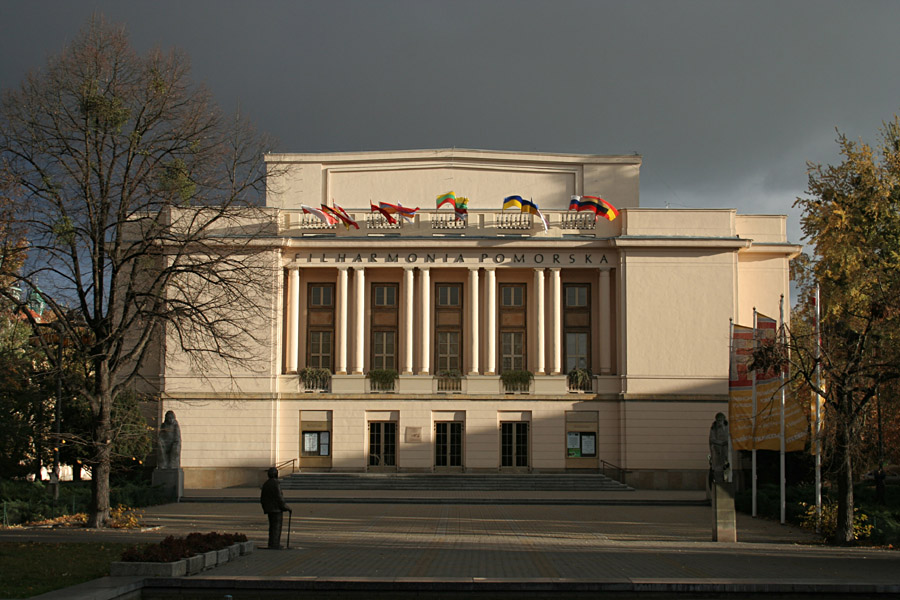